This post is dedicated to one particular person that has indirectly asked me to say something on this topic. She’s one of the sweetest people with pure heart and intentions. She called me the other day, crying on the phone, saying she’s had enough. That she can’t take it anymore. That it is too much and she wants to quit, run away, and hide.

For a second or two I was torn between the role of a therapist and a role of a friend, but the picture soon became clear, telling me I should act according to my heart, not my head (my most representing personal quote when introducing myself to someone through CV or other written form is When dealing with your own issues, use your head. When dealing with other people’s issues, use your heart – you may borrow and use it, however would appreciate to acknowledge the source :)).

I asked what was wrong. She couldn’t specify, then after a while she told me what’s happened (will not go into the details here due to disclosure, but it was something she was afraid would happen and she felt abandoned as well as incredibly sad and disappointed). She said that all she wanted was to understand everybody. That she wanted to please everybody, even though some people might have the opposite views, she wanted to agree with both sides.

Being a friend I replied that this is THE one thing that is IMPOSSIBLE. End of story. Very few things are impossible and this is one of them.

Take my case for example. You read and follow this blog because you like something in it. Some other fellows might find it ridiculous, boring, funny, whatever. Name 100 people and you’ll get 100 viewpoints and opinions. All legit and right from their point of view (remember the post about objectivity? Well that’s it). If I get a feedback that what I do is nonsense, would that stop me? Would that make me change something so that it will make it more likeable to this person? Well, depends of course who this person is and what the critique was about. If it was meant in a constructive way to improve my performance, then I would think about it and if it was said with respect. If not, well there’s plenty other people who might please you better and I’m sorry for not fitting your frames. But that doesn’t make my picture any smaller or bad. I’d never apologize for what I do or how I feel. It’s like saying sorry for being real. So if you don’t like what you see, do us both a favour and don’t stick around.

If I would change because I’m not pleasing everybody, then this would predict 100% guarantee failure for everybody. Not just the one I disappoint, but the rest who are satisfied with me. But if I stick with what I believe in and with what excites me that would enable me to be excellent for some. And that’s good enough. 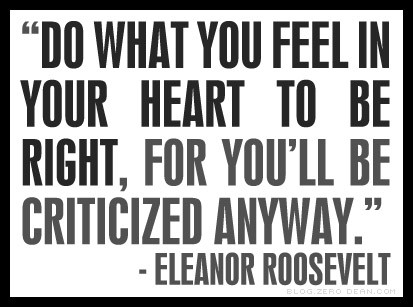 It’s not rocked science really, maybe that’s why it is so hard as it happens to you? (Picture borrowed from http://www.brightstar.co.nz/blog/2012/06/confessions-of-a-serial-people-pleaser/)