You were born to count the stars PART 2

Have you ever received a genuine compliment? I’m sure you have. And have you ever had an opportunity to give a compliment that came from your heart? Probably also.

But we do it way too rarely. And this is a huge pity.

I believe that compliments are the best feedback you can give to someone. BUT (!): Compliments have to be real, genuine and based on facts. Otherwise it’s just plain small talk that in best case keeps the other person amused and in the worst case she/he might feel offended that you make fun of them. In order to be able to think of an appropriate compliment, you have to learn to listen to certain skills and values within the person you are about to compliment. And to do this, you can not listen to their problems, nor can you take a judgemental position.

I regularly run exercises on compliments when I work with groups. And I use it all the time with my clients. Why? Because I want to make them feel better? No. I use this as a feedback to show them their own resources. And it works.

Such an activity I prepared for my youth exchange group I told you about in Part 1 of this blog post. The activity was to write on our backs some things we appreciate about the other person. The key was that we were not allowed to see what’s on our backs, nor who is writing. In the second part we wrote our own qualities that we believe we possess ourselves, on a special piece of paper and later on combined it with what was written on our backs. It is much fun to observe people’s reactions as they read messages from random people. Often it happens that the messages are accurate and even much more appreciative than what you dare to say or think about yourself. To sum up the exercise, we read aloud three things about ourselves that touched us the most. It was a very special moment and some people reported that it was hard for them to read aloud positive things about them, but because we created a very safe and intimate atmosphere, they took a chance and were not disappointed afterwards.

Just for fun, try to use a compliment as a feedback when somebody asks you a question or expects you to comment on a current debate issue. You might be very surprised what you’ll get in return. I do it all the time and sometimes the boomerang hits me back with unexpected surprises.

Take this for example: while I was in the UK, I got pretty attached to a certain cup/coffee mug. It was a very funny cup with cute small sausage dogs drawings. I always had my tea or hot water (a strange habit, I’ll tell you more about it on some other occassion) in that mug. Always. Then as the family noticed how much I like that mug, they took me to the store where they bought it. But unfortunately it was last season’s model and they ran out of it. I was quite disappointed, but hey, it was not meant to be. I took a picture of it and promised myself that I’ll make my own one day.

Then, a couple of days ago, I got a package. Didn’t look carefully where it came from, because I was expecting something and thought that was it. But inside there was something wraped and a message enclosed. It was the sausage dog mug! I couldn’t believe my eyes. R. made special efforts to look that mug up and she said it was the last one. And I knew she liked this mug as much as I did, but she bought this one and sent it to me from England. I was really really touched and grateful. To have friends like that who remember you and make something so nice, is a true gem.  A gem to value and nourish.

Try. Compliments work. If you don’t know how, come to some of my workshops and I’ll show you ;). You’ll learn it quickly. 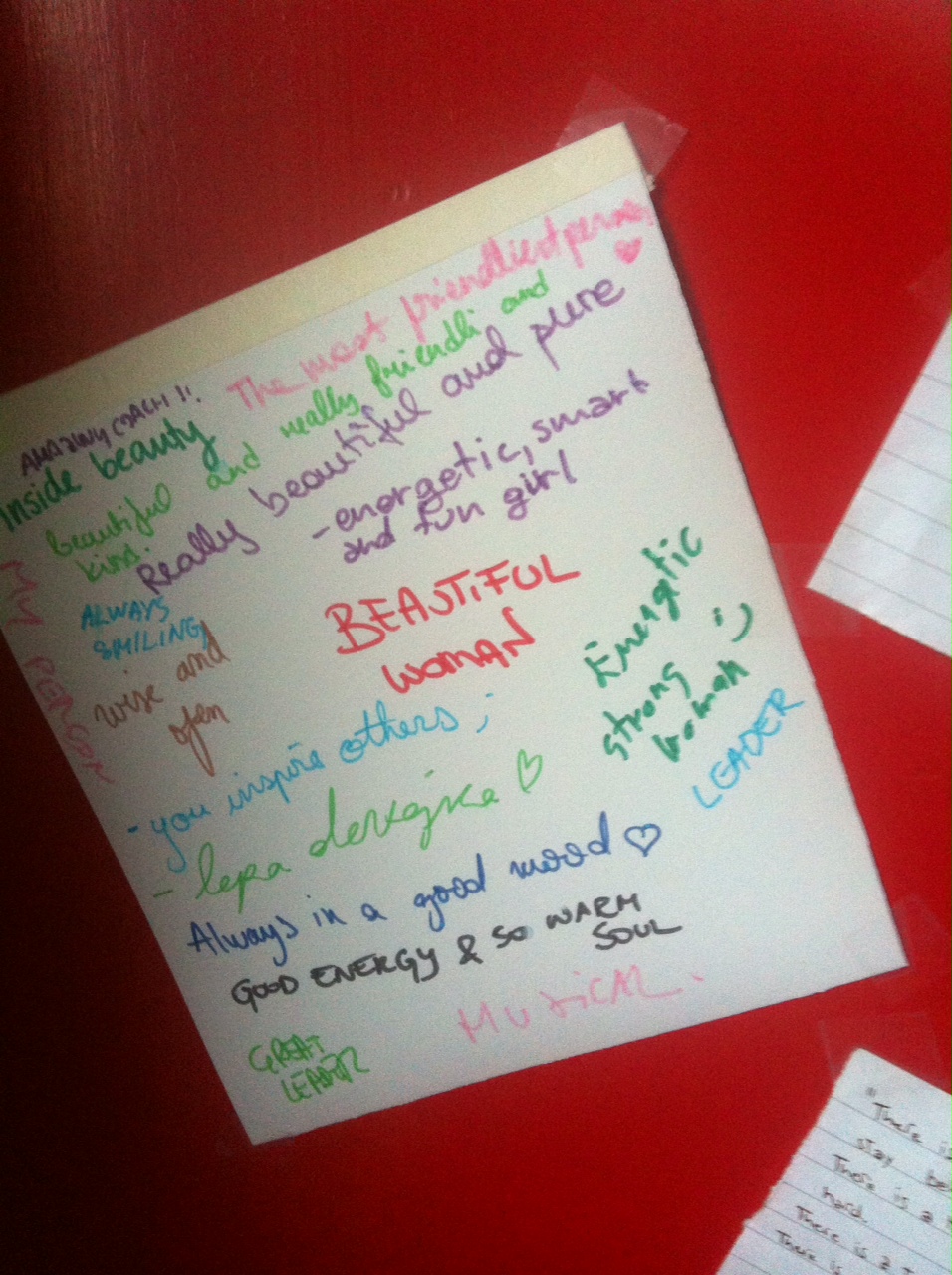 My back feedback. I was deeply touched. 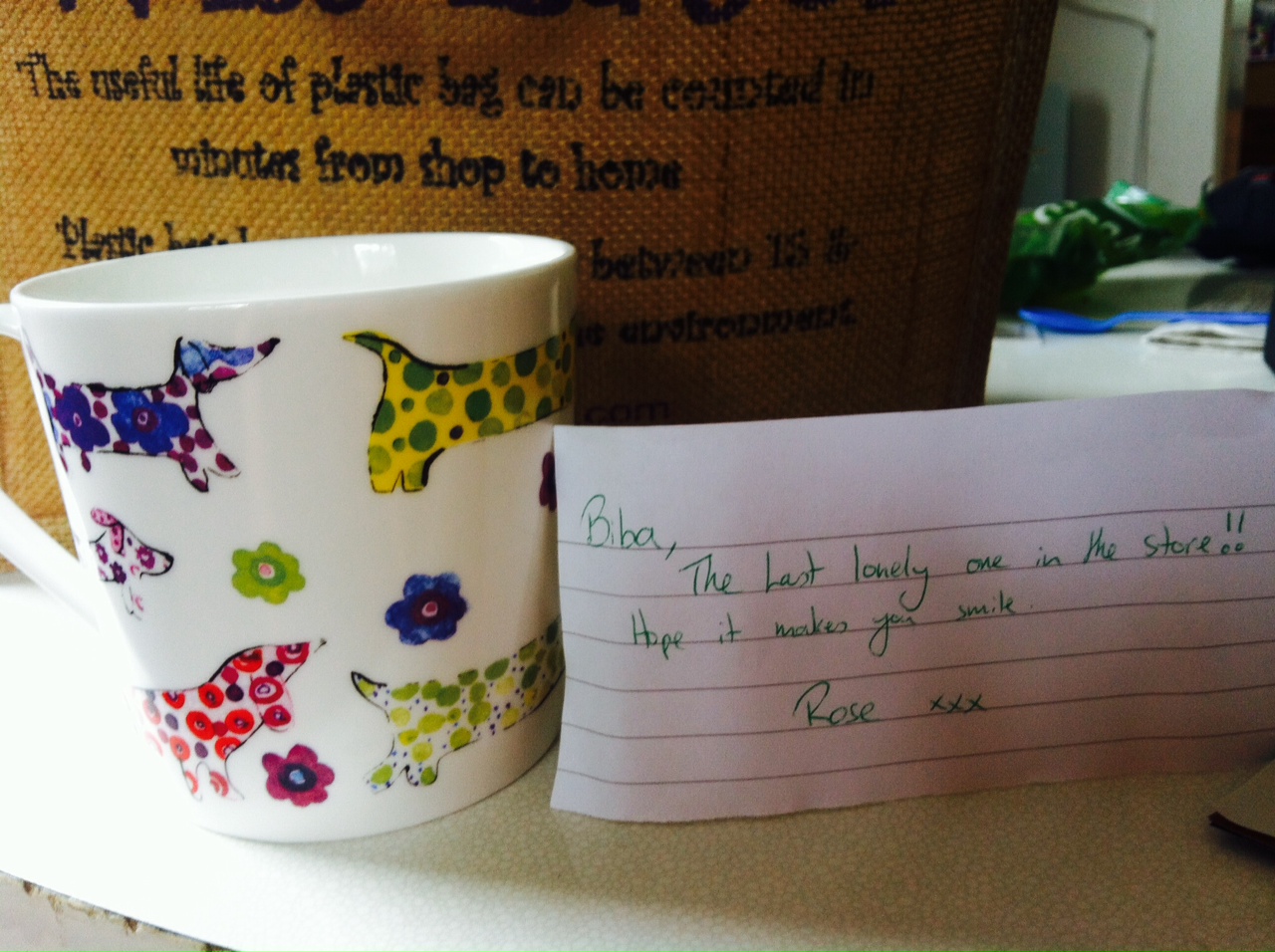